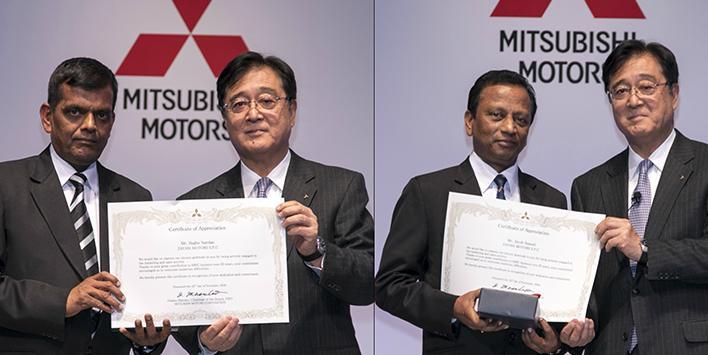 As part of its keenness to appreciate loyal and long serving employees, Zayani Motors thanked Mr. Jacob Samuel, Spare Parts Manager, and Mr. PullassryRaghunandanan, Senior Sales Executive, for the undying efforts and contribution towards the Mitsubishi’s success in the Kingdom.

As a token of appreciation, Mitsubishi Motors Corporation invited Mr. Jacob Samuel and Mr. PullassryRaghunandanan to attend the Global Distribution Meeting, which was held on 25th November 2016 in Tokyo, Japan. During the meeting, officials thanked them and expressed their gratitude for their relentless hard work and contribution for all these years.

Mr. Mohammed Zaki commented on this occasion and said, “Both our extraordinary staff members are an inspirationstrong,and integral part of our team that reflects devotion and loyalty towards the company. We wouldn’t have been where we are today without the contributions of each one of them. I would like to take this opportunity to thank Mr. Jacob Samuel and Mr. PullassryRaghunandanan for being an example of proficiency and dedication at Zayani Motors.”

He further added, “It is an honor to have Mitsubishi Motors Company invite them to the Global Distribution Meeting to express their sincere gratitude and appreciation.

It is worth noting that both, Mr. Jacob Samuel and Mr. PullassryRaghunandanan have been employees of Zayani Motors since 1994 and has shown exemplary work in their area of expertise. From their side, the two employees thanked Zayani Motors and Mitsubishi for this generous opportunity.