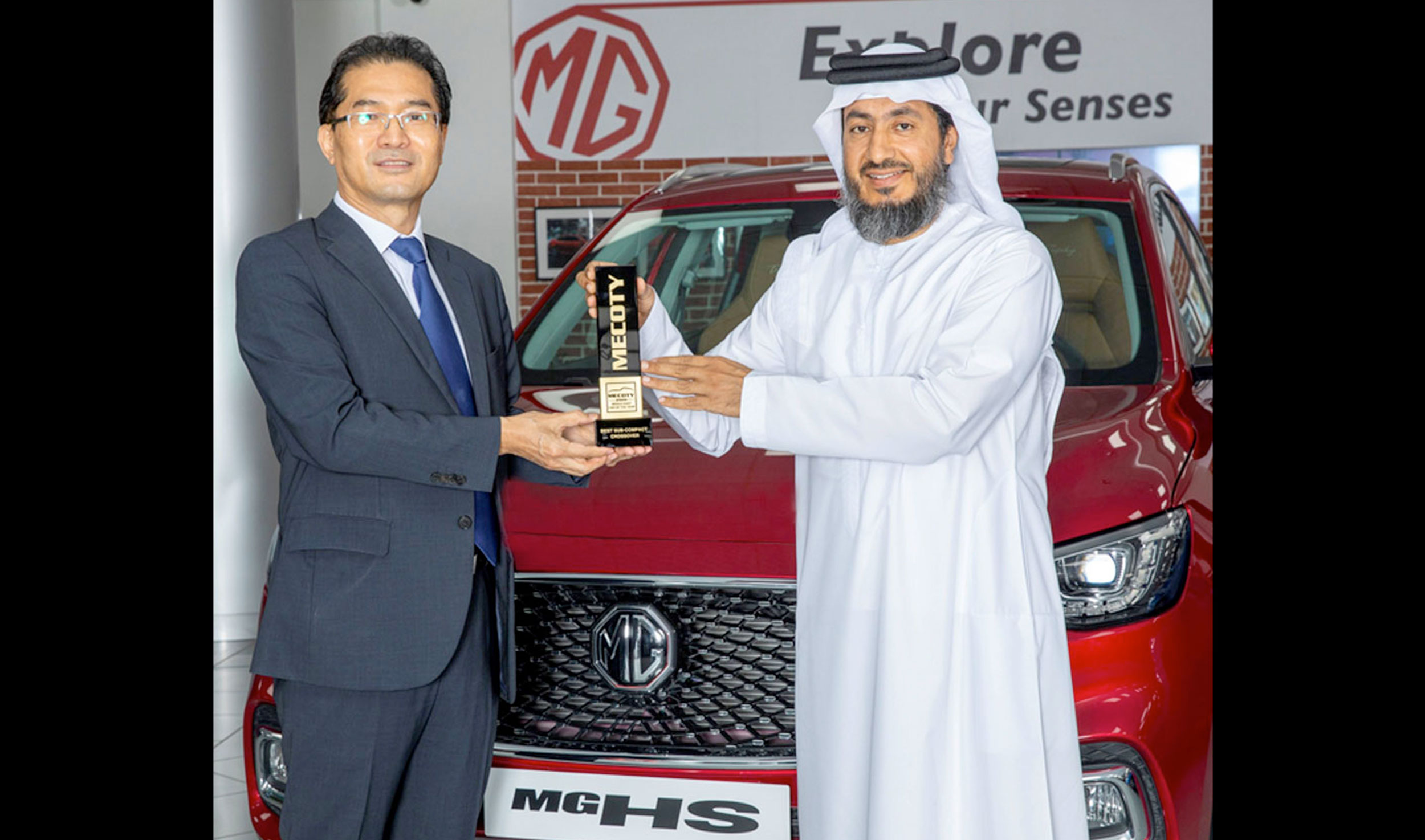 MG Motor’s remarkable rise through the ranks of the Middle East automotive world has been crowned with the British-born brand picking up the region’s most prestigious motoring award – the MG HS has been named 2020 ‘Car of the Year’ by a panel comprising some of the region’s leading automotive experts. The MG HS was also named ‘Best Sub-compact Crossover’, while the MG 5 was named ‘Best Sub-compact Sedan’.

The Middle East Car Of The Year Awards announcement is a stunning achievement for MG, which only officially returned to the region in 2015. The Middle East’s new ‘Car of the Year’, the all-new MG HS has been designed to put the ‘sport’ back into SUV, harking back to the racing heritage of the historic MG brand.

The Middle East’s ‘Best Sub-compact Sedan’, the new MG5 has been completely re-designed from the ground-up with a brand-new personality to appeal to MG’s young audience in the region. With its sharp, aggressive lines it offers customers all-round best-in-class specifications. The list of premium features includes a 10.1” touch screen with Android Auto and Apple Car Play, a 360 camera plus rear parking sensors, an electric sunroof and electric seats.

Like all MG models, both MG HS and MG 5 come with a best-in-region 6 years/200,000 km manufacturer’s warranty.

The 2020 Middle East Car of the Year (MECOTY) awards were voted on by a panel of 14 journalists, experts and opinion-leaders from across the region. Representing Bahrain, Egypt, Jordan, Lebanon, Saudi Arabia and the United Arab Emirates, the jurors nominate new vehicles through a strict scoring and voting process.

Saeed Marzouqui, Chairman, Organizing Committee MECOTY, said: “As a brand, MG is currently making waves among the Middle East motoring scene. Its range of excellent new models are being snapped up

in record numbers across the region, and our jury members have had the opportunity to experience for themselves just how good the new MG line-up really is.

“Beautifully designed and well made, the MG HS is an eye-catching mid-size SUV, packed with the latest features and cleverly straddling the line between a premium package and competitive pricing. It may surprise some, but it is a truly worthy winner of the 2020 ‘Jury Car Of The Year award’.”

Tom Lee, Managing Director of MG Motor Middle East, said: “We are very proud that the MG HS has won the top honour at the 2020 Middle East Car of the Year Awards. For one of our models to take the region’s leading motoring accolade less than five years after the brand’s return is without a doubt a fantastic achievement and comes at a time when more customers across the region are buying MG cars than ever before. To get the better of the very best new models available in the market, across 29 categories, and competing with brands ranging from the established Japanese and Korean manufacturers right up to the big luxury marques, is the clearest possible endorsement of the quality of the current MG line-up’.