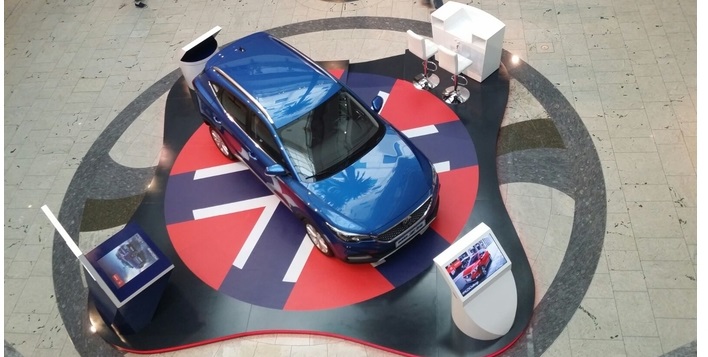 Zayani Motors, the exclusive distributor of MG in the Kingdom of Bahrain arranged a one of a kind display activating the brilliant MG ZS model at City Centre, from 8 March to 13 March, part of a series of promotional events held across the GCC. The display was installed for the benefit of prospective car-buyers among shoppers in the mall, many of whom would find the requirements of the car they were looking for more than satisfied.

The MG ZS is characterised by its smooth lines and high-end touches. It is an affordable compact SUV, designed to give its owner premium style, without the premium price tag, making it a valuable purchase for any discerning buyer.

The display also included a MG ZS challenge contest, which had a grand prize giveaway of an all-paid trip to Dubai. The contest comprised of an augmented reality car park challenge, where customers had to play the MG ZS car park game and complete it within 2 min to win.

The winner of the contest was the lucky Mr. Sayed Ahmed Jaber Khalaf, whose prize included a stay in 5 star hotel in Dubai along with full day visit to Dubai parks and resorts, Ski Dubai and Safari Dubai trip. “I am overjoyed and incredibly grateful to Zayani Motors for this great opportunity. I never would not have imagined stumbling upon such luck,” he commented.

Mohammed Zaki, General Manager of Zayani Motors, congratulated the winner for his prize and said, “We were thrilled to bring the MG ZS display to City Centre, giving visitors of the mall and car enthusiasts alike an insight into the exciting model.”