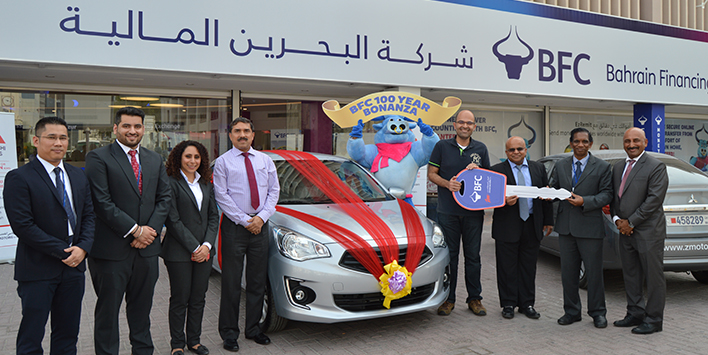 Mr Ahmed is the first of three fortunate new car-owners of vehicles provided by Zayani Motors. The prize handover took place at BFC’s Manama Branch, in the presence of senior BFC and Zayani Motors officials, including the respective General Managers, PancilyVarkey and Mohammed Zaki. Mr Ahmed expressed great delight and gratitude at receiving his prize, an impressive Mitsubishi Attrage.

This campaign, which was launched by BFC to celebrate the passing of a century since its establishment, grants customers who conduct any transaction between the time period of 28 May to 4 September the chance to win amazing prizes during the monthly draws, the biggest being three automobiles provided by Zayani Motors.

On his part, Zayani Motors’ General Manager, Mohammed Zaki commented: “We at Zayani Motors are enthusiastic about partnering with various campaigns and initiatives, providing our support in giving back to Bahrain’s great community.