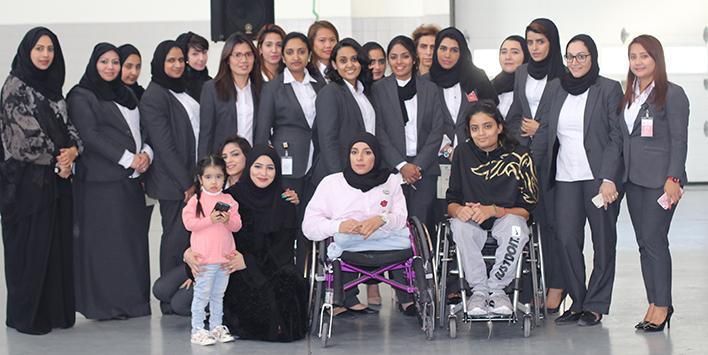 Zayani Motors celebrated Bahraini Womens Day with a special themed monthly staff party, where female employees were recognised and acknowledged for the vital role they play in the development of the organisation and in turn help in the progress of the community.

To mark this occasion, a special gathering was held at Zayani Motors headquarters, during which two of Bahrains dignified athletes, Ruba Al Omari and Amal Al Fardan were invited to share with the crowd stories of heir experiences and achievements that was uplifting and inspirational to all the attendees. Ruba Al Omari and Amal Al Fardan, are Bahraini athletes who have represented the kingdom of Bahrain in various local, regional and international tournaments. Amongst her many achievements, Ruba was qualified to participate in the Disabled Olympics that had taken place earlier this year in Rio, where she won seventh place in the world. In addition, Amal had also qualified for the Fazza’s International Championship for shot put.

During the event, every female staff were thanked by the company management for their generous and loyal service to the organisation, adding that Zayani Motors would continue to support the women in helping them accomplish their goals both within and outside the organisation.

Mohammed Zaki, General Manager of Zayani Motors, during the recognition ceremony, commented, “It brings us great joy and honour to have such an active participation of women in organisation. This goes to reflect their dedication and drive to empower the community with their enduring loyalty and constant dedication. On the occasion of Bahraini Women’s Day, I would like to take this opportunity and thank the efforts of the women at Zayani Motors, who have worked tirelessly to contribute to the overall success of Zayani Motors.”

It is worth noting that Bahraini Womens day is celebrated on the 1st of Decemberevery year throughout the Kingdom of Bahrain. The concept of celebrating Bahraini Women’s Day is an initiative by the Supreme Council for Women (SCW) led by Her Royal Highness Princess Sabeekabint Ibrahim Al Khalifa, to honour and highlight the vital role Bahraini women play in the economic development of the Kingdom of Bahrain.