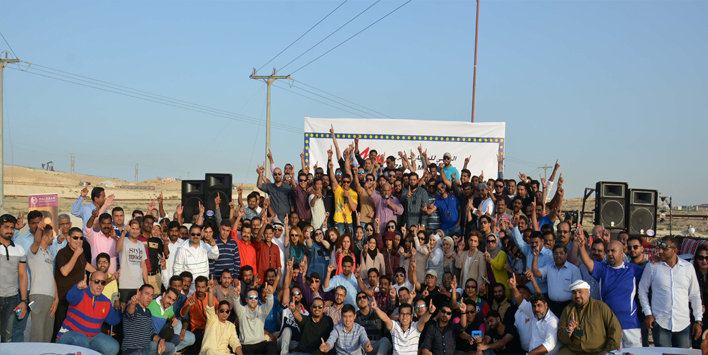 Zayani Motors the exclusive dealers of Mitsubishi in the Kingdom of Bahrain hosted an annual staff party to show the company’s appreciation to the employees.

Attending the celebrations was Mr. Majid Al Zayani, Managing Director and Mr. Mohammed Zaki, General Manager of Zayani Motors. Staff turnout and participation was at full strength with all the Zayani Motors staff numbering at 220 being present at the event.

They were treated to a traditional Bahraini camping style festivity held at the Le Petit Camp in Sakhir. Games, group activities and prizes were the order of the day as the intention was to ensure everyone had a fun and great time.

The celebration also served as a platform for an award ceremony where outstanding employees were formally felicitated for their years of dedicated and loyal service. Four employees were rewarded with awards that included Employee of the Month, and Year 2015 Extra Mile Award. Two staff members were also bid a formal farewell and thanked for the efforts and loyalty to Zayani Motors.

Mr. Majid congratulated all present on the occasion and commented, “It is indeed a pleasure and a moment of pride for Zayani Motors to have such dedicated people whose contributions have helped the company to grow since it began. It is also a moment of pride to note that our staff has constantly worked to bolster us to among the leading dealership in automobiles and other sectors in the Kingdom.”

Mr. Mohammed on his part thanked the staff and stated, “It is the efforts and dedicated loyal service of Zayani Motors employees that strengthen us as an organization and allow growth phenomenally. It is heartening to note that we all have always worked as a team while simultaneously giving the best in our individual capacity. The result of this is outstanding performances across all the different departments of Zayani Motors. So let us all celebrate today and look forward and work to have another great year.”