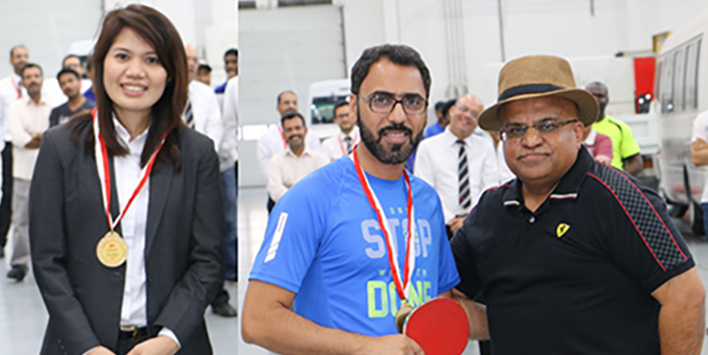 Zayani Motors, recently organised a Table Tennis Tournament for its employees. The event took place on August 2, 2017 until August 10, 2017 at the company’s showroom in Sitra.

The tournament aimed to encourage social bonding among the staff, providing them with an opportunity for recreation in an amicable atmosphere.

No less than 44 employees participated in the event, with a total of 52 matches played. Competition was close and many showed high levels of skill and determination.

On the ladies’ side, employee Jonalyn Nuique snagged the first place victory, followed by Noor Almulla in second place, Samya Alkindi in third, and Mae Francis Tranco in fourth place.

At the end of competitions, which were marked by high spirits and admirable sportsmanship,the winners were crowned and given cash prizes.

Mohammed Zaki, General Manager of Zayani Motors commented on the occasion: “Zayani Motors values its workforce and is keen to hold events that both entertain and encourage bonding between them, in order to create an environment at the workplace that is like a second home.”

He added, “I also commend the level of organisation by the organisers who ensured that the tournament went smoothly without any hitches.”

First place winner Jonalyn Nuique commented: “It was great amount of fun! All of us got to unwind a little, focusing our energies on the exciting matches and cheering each other on. I’m absolutely delighted to have won.”