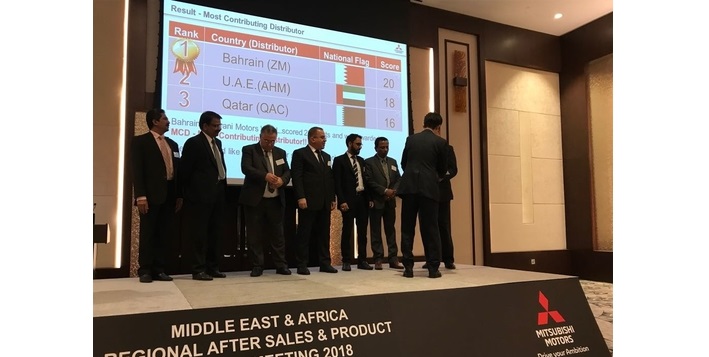 Zayani Motors, the exclusive distributor of Mitsubishi in the Kingdom of Bahrain, was recently bestowed an achievement memento and certificate from Mitsubishi Motors Co, Japan, on account of being the most contributing distributor in the region.

This took place during the annual Mitsubishi Motors Middle East and Africa Regional After Sales and Product Quality Meeting 2018, held at the Dubai Metropolitan Hotel. Zayani Motor was announced to be the biggest contributing Mitsubishi distributor out of all GCC states, with an impressive total of 20 points. UAE placed second with a total of 18 points, while Qatar came third with 16 points.

Accepting the honours on behalf of Zayani Motors, Mr. Jacob Samuel, Parts Manager at Zayani Motors, expressed immense pleasure at the side-lines of the event, stating, “Zayani Motors prides itself on its efficiency and work ethic, prioritising the customer above all else. Our reliability and dedication to the successful closure deals, supplying the demands of the local market, as well as providing our customers with the best offers in the Kingdom means that we ensure customer satisfaction, with uncompromised quality which places us at the top.”

He added, “We are delighted to set yet another milestone in Zayani Motors’ record of achievements. It is immensely rewarding to see that our hard work and diligence has paid off, with visible results on a regional level. We are confident that this recognition will only boost our line of operation, giving us the drive to garner more success.”