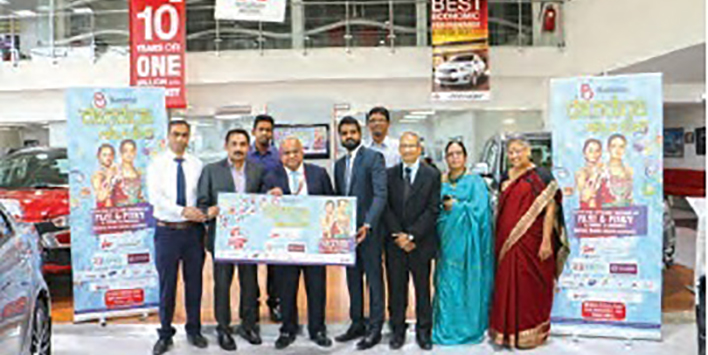 Zayani Motors, the Kingdom’s exclusive distributor of Mitsubishi, MG and FUSO, announced that the company is sponsoring Batelco Dandiya Mela 2017 festival. Priti and Pinki will participate in the event with their 13-member Dandiya band. Accordingly, Zayani Motors have organized a special event for the launch of the entry tickets, where many senior officials from the organizing committee and Zayani Motors, such the company’s General Manager Mr. Mohammed Zaki, attended it.

Dandiya is an Indian community festival that has been popularized by Bollywood. It is celebrated between September to October with simple and colorful folk dance, whose moves can be performed easily by everyone. It is an occasion to bring out the best traditional clothes and it is totally a family event.

Each year, at least six major Dandiya events are conducted by various Indian clubs in Bahrain but they are usually managed on a smaller “local” scale and with local deejays in charge of the music. But this Dandiya Mela will be anchored by a dazzling 11-member Dandiya music group from Mumbai, led by the stylish musical sisters, Preeti & Pinky, making it the grandest Dandiya event to take place in Bahrain as the organizers intend to host a full-fledged Dandiya in mela (fare) style with food stalls.

Mr. Mohammed Zaki, Zayani Motors General Manager, expressed his pride in sponsoring such important festivals, at the same time he noted to the company’s keenness on supporting such activities that is aimed at supporting the tourism sector in the Kingdom of Bahrain.

He commented: “Zayani Motors sets supporting such festivals and activities among its social responsibilities and priorities. We are glad to be one of the sponsors of this festival, which is expected to be an attracting fun day for all family members, as it will witness entertainment activities that target different age categories and will include music shows and traditional dances. I am sure that people in Bahrain will attend this event and enjoy the accompanying activities.”